Multi-awarded broadcast journalist Karen Davila returns as one of the anchors of “TV Patrol” starting Monday (October 11) as ABS-CBN’s flagship newscast strengthens its mission to serve Filipinos worldwide with news and information that matter to them. 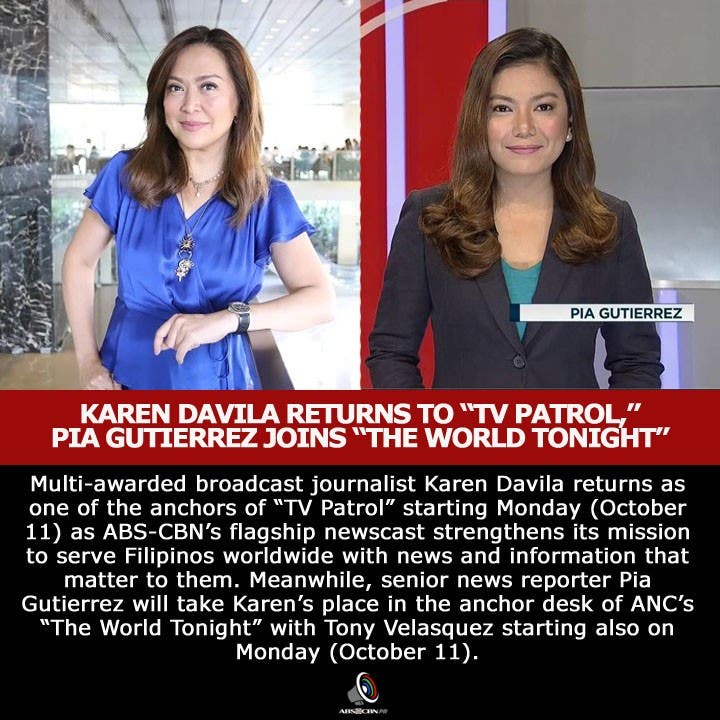 Karen joins fellow seasoned news anchors Henry Omaga-Diaz and Bernadette Sembrano-Aguinaldo in leading the 34-year old news program that is committed in bringing fair and accurate news to as many Filipinos, especially in this critical time for our country.

Karen, the award-winning anchor of “Headstart” on ABS-CBN News Channel (ANC), first became part of the newscast from 2004 until 2010. She was also one of the anchors of ABS-CBN’s late night newscast “Bandila” prior to the broadcast shutdown in 2020.

Pia, who currently covers President Rodrigo Duterte and is part of the Malacanang Press Corps, began her career as a journalist in ABS-CBN’s regional station in Baguio in 2006. She joined ABS-CBN News and Current Affairs in 2010.

Watch “TV Patrol” with Henry Omaga-Diaz, Bernadette Sembrano-Aguinaldo, and Karen Davila from Monday to Friday, 6:30 pm on ANC and TeleRadyo on cable and satellite TV, overseas via TFC, and online on the ABS-CBN News YouTube Channel, news.abs-cbn.com, or listen to the audio streaming via the ABS-CBN Radio Service App.

“The World Tonight” with Tony Velasquez and Pia Gutierrez airs Monday to Friday, 9 pm on ANC and 10:40 pm on the Kapamilya Channel and is also available on iWantTFC, TFC, and other ABS-CBN News digital platforms.