The end of this heist is coming! To celebrate the final part of La Casa De Papel, Netflix has teamed up with four Filipino artists to create artwork inspired by some of the most iconic imagery and moments from all four parts of the hit series.

The artwork, called #LaCasaDePapelChallenge, is a tribute to some of the greatest and most memorable moments of the show. Each artist created their paper artwork in their own signature style. 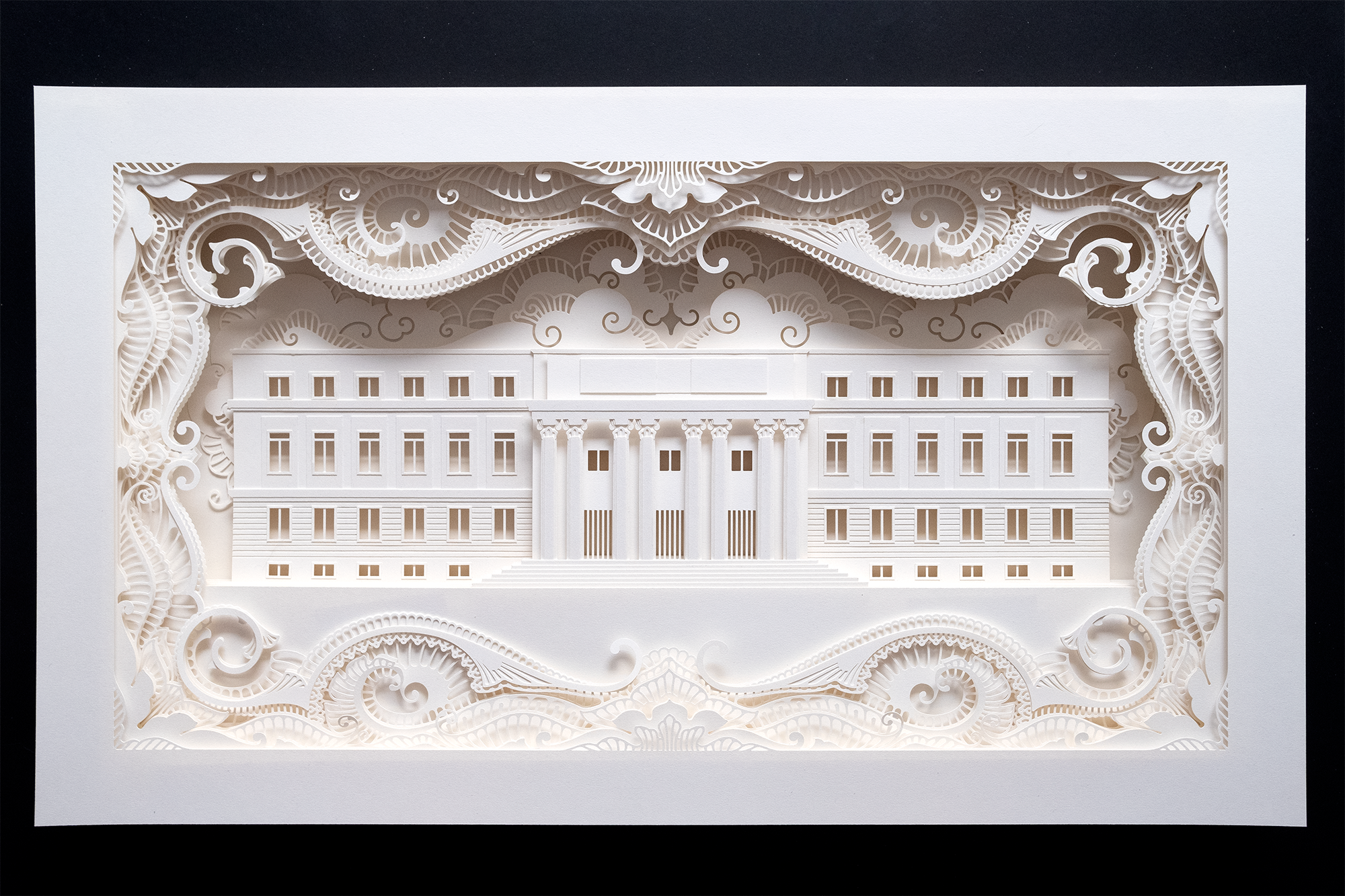 I have been doing paper art since I was a kid. I grew up in a rural area where art materials are scarce. I gravitated to paper because it’s everywhere. We had a project in high school which involved cutting letters out of paper and my passion for paper-cutting grew from then on. My style is ultra-maximalist. More is more!

Talk a bit about your artwork. What does it symbolize from the show?

I picked the Royal Mint because it’s the embodiment of the enemy. The corrupt system. I like the juxtaposition of something so powerful with something fragile like paper.

It has all the elements that I like in a show. I feel like this show is more comedy than anything else. There’s always something that’s totally unexpected, and sometimes it’s just crazy.

My favorite character is The Professor because I can relate to him more. Even if you are the best planner in the world, there’s always something that will not go according to plan, especially when you work with others. 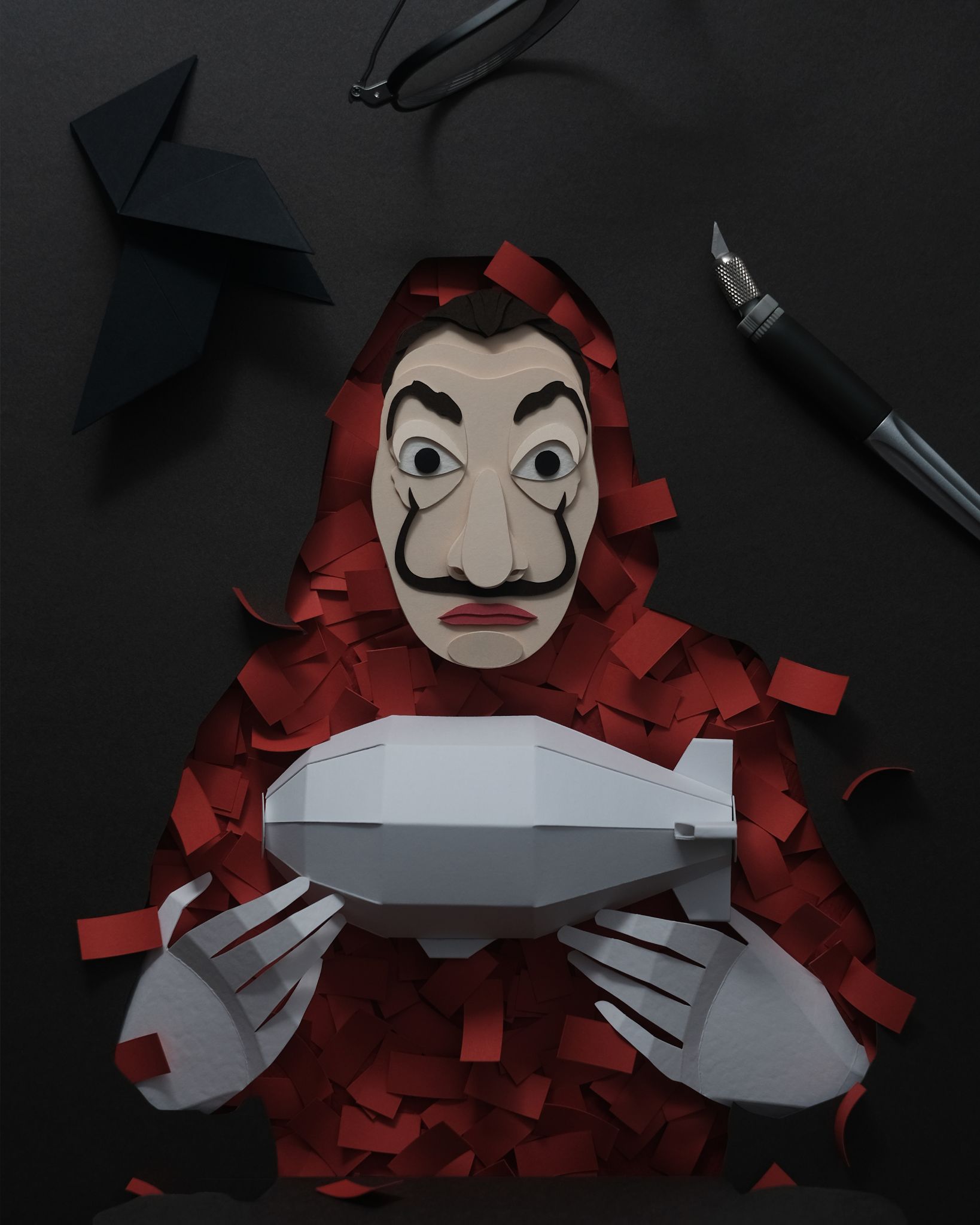 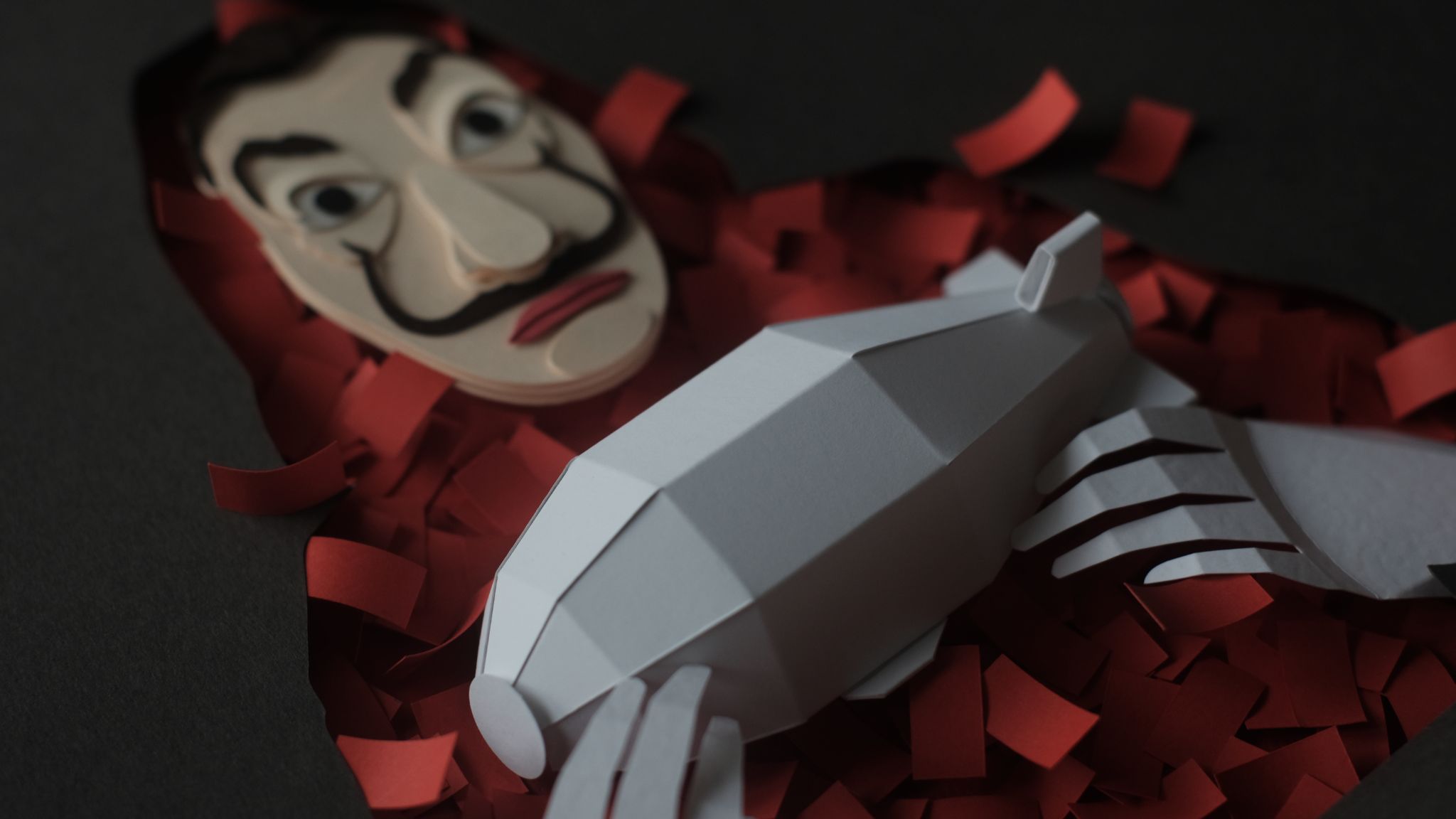 I started my love for paper art during college, in one of our plates, when we were asked to create a print ad using papier tole as a technique.

Technically, I combine both papier tole and kirigami to create depth in my artworks. The shadows created by the layers and protrusions of the paper add a certain dimensionality to my pieces as a result.

The blimp was used (to release 140 million Euros over Madrid) as a distraction in Part 3, while the Dali Mask, as we all know, has become an iconic symbol of resistance that has inspired a lot of people to fight with the Professor and the team. The red money coming out of the blimp forms the jumpsuit holding the blimp. The overall visual imagery is my personal homage to surrealism.

Apart from the idea of it being a heist and planning an escape which I love in a show, I enjoy the opening credits (for obvious reasons) and the soundtrack. I like Tokyo’s and Nairobi’s characters but I feel the Professor and I have the same personality, haha. 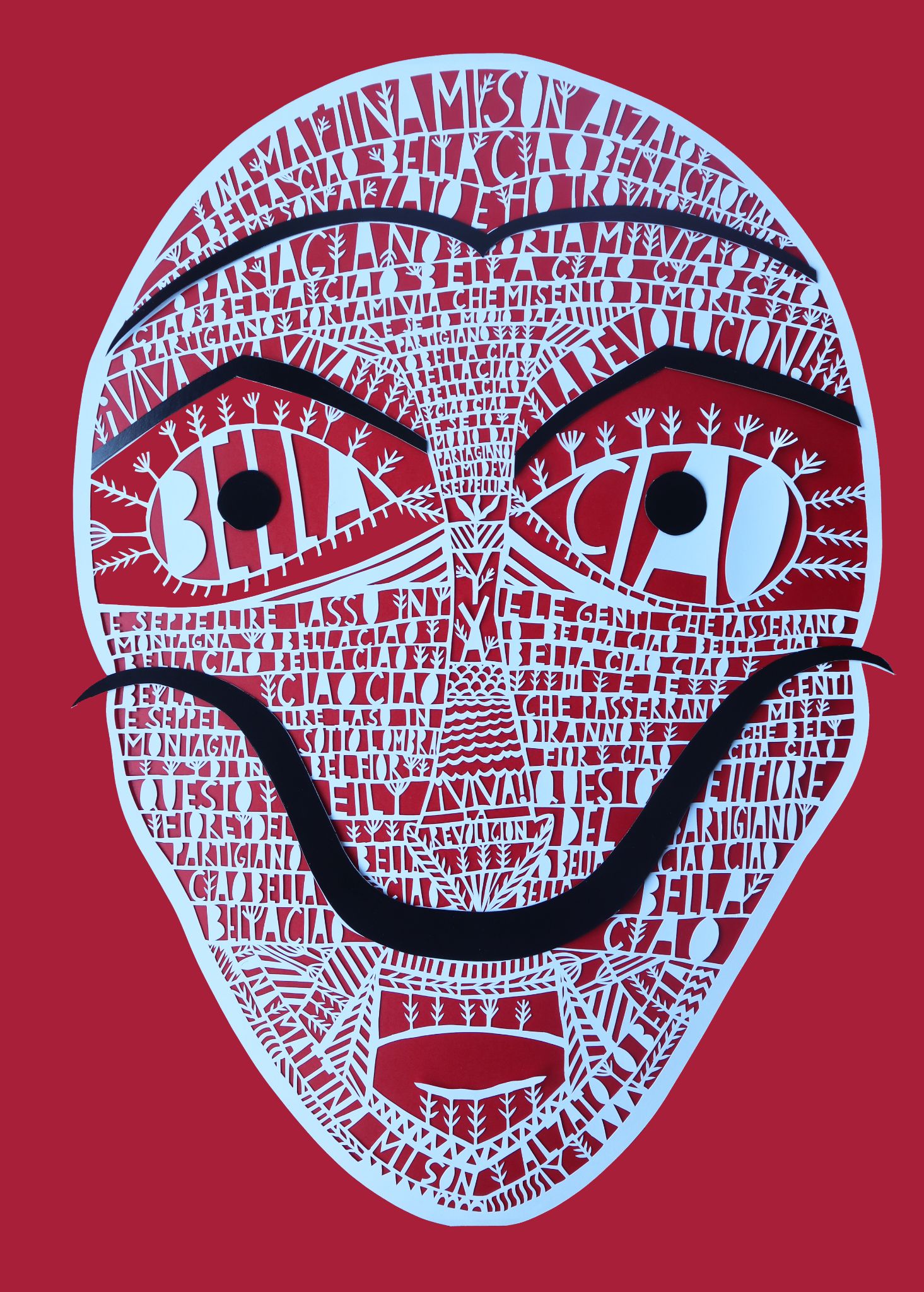 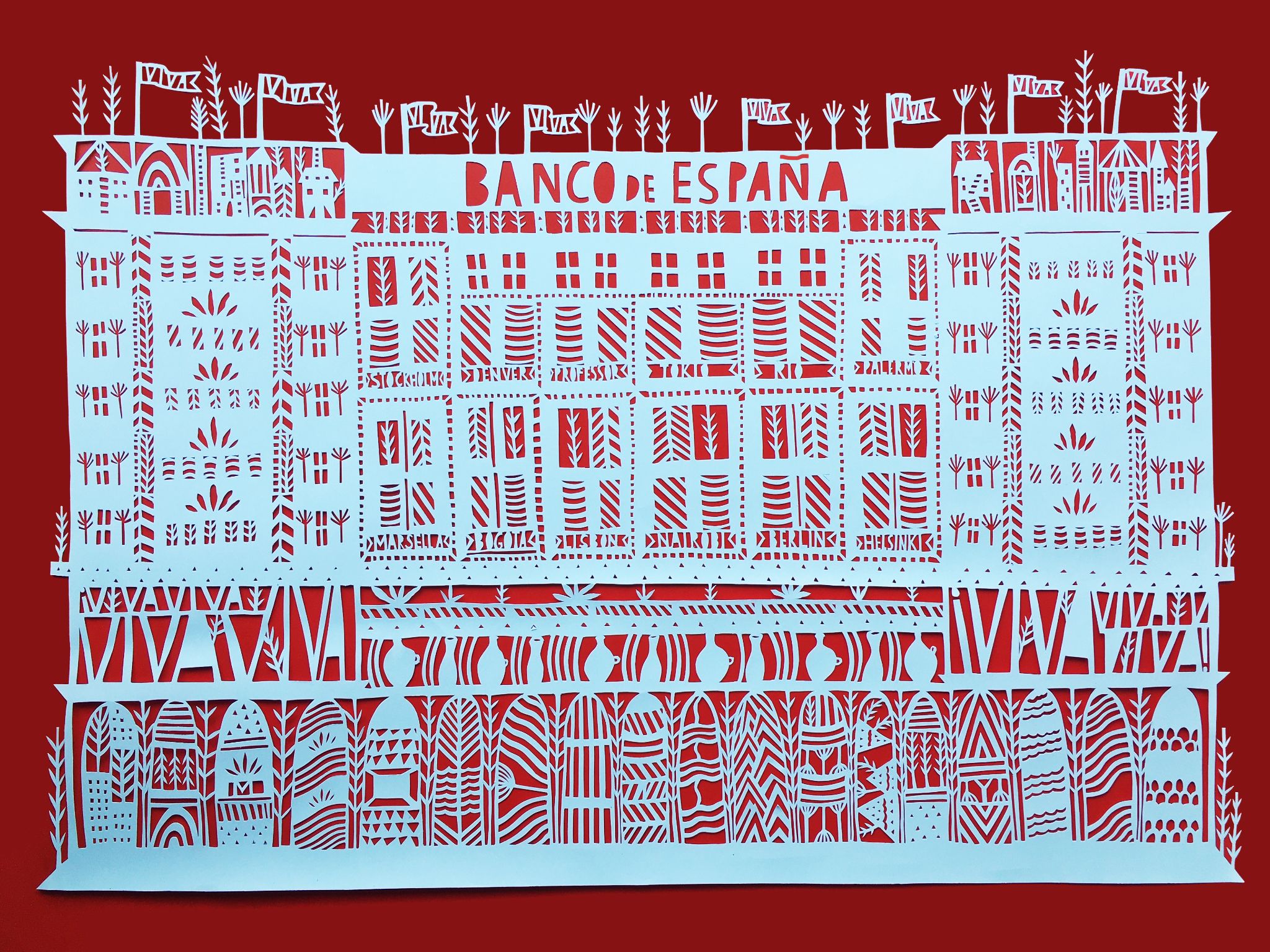 I’ve been into papercutting since 2012. I love how it’s very therapeutic and meditative. It helps you focus on just one thing, on one thing that you can control – something which is very useful especially in the kind of world that we live in right now. No matter how things get overwhelming, when I am working on a papercut, the only thing that matters is that I cut. And cut. And cut again so I can finish the piece and be able to share a new story to the world.

Also, papercutting to me is like reverse painting! In painting, you add elements or paint to tell a story but in papercutting, you take away unnecessary parts to tell or create stories. And that’s pretty amazing to me.

My style is very delicate and dainty. From afar, it looks cute and playful. But when you think about it, it’s actually very edgy because the lines are super thin and the details are so small. I love taking risks with my papercuts! Haha!

I worked on two papercut pieces. The first one is the Dali Mask with the Bella Ciao lyrics!

Bella Ciao is the gang’s battle cry! It unites and makes them stronger as a unit. They’re able to overcome every challenge, every twist, every dead end because of this. And this is even reinforced by the Dali mask and the red jumpsuit – a symbol of resistance against the system. It’s also a great equalizer. It’s a reminder that the thieves and hostages actually want the same thing – to be free from the system.

The second piece is my version of the Bank of Spain. It symbolizes the system. In the series, they showed a papercut of the building – it looks so serious and rigid, as expected. So I thought of adding my own elements, fun details, quirky elements, and flowy lines to remind us that no matter how tough, daunting, and impossible to change the systems seem, humans are still the ones who run it. And there’s always something we can do to change the systems in our lives if we want to. It’s in our hands.

I love the show because the characters are on a whole new adventure even if they’re just inside one place! Say, in seasons 3 and 4, they are inside the Bank of Spain but it’s not just the robbery that you’ll get to know about but also each character’s true self. You have a front-row seat of what they care about, their innermost dreams and demons, what makes them tick and inspired; what makes their relationships stronger. Basically, what makes them human.

My favorite character is Tokyo! I even dressed up as her at a street Halloween party! Well, almost EVERYONE actually went to the party dressed in a red jumpsuit (with a matching Dali mask)! HAHA! Dyahe but could you blame us? 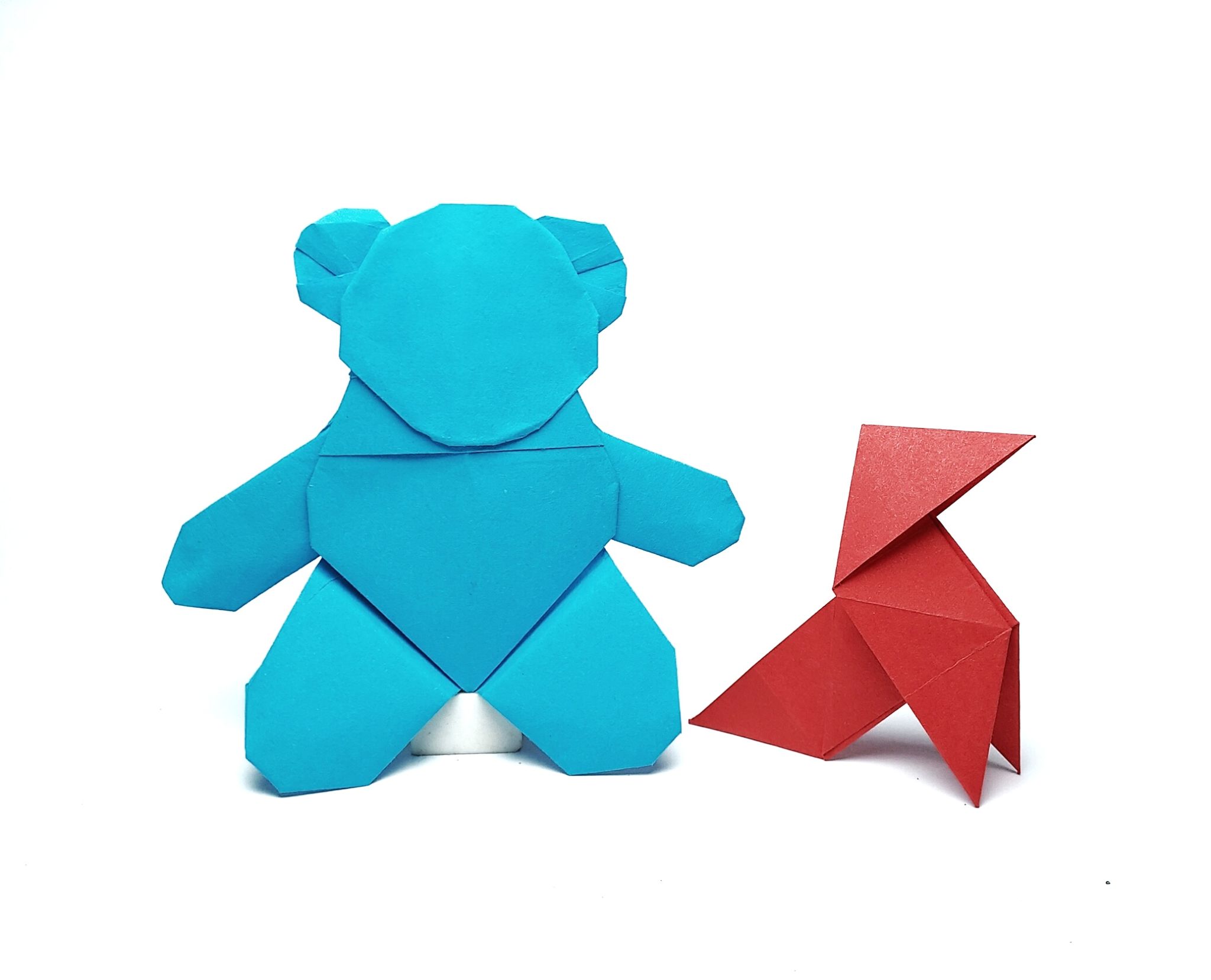 I discovered my love for Origami Art way back in 2013 when I decided to learn an Origami crane so I can teach it to my Korean and Japanese students in school. My style in Origami has always been vast. I’m constantly inspired by nature, things from my surroundings, mythical creatures, and animations.

For me, the goal has always been to transform a single sheet or multiple pieces of square papers into a finished sculpture through intricate folding and sculpting techniques.

I worked on two pieces for this collaboration.

The first is the Professor’s red origami bird, which has played a big role in the show from the very beginning. As a lover of Origami artwork, I was so happy to see it featured so prominently in such a popular show, and I hope it inspired many others to try Origami themselves.

The second is Inspector Alicia Sierra’s teddy bear from Part 3, which she strategically used to take down Nairobi because it belonged to her son. No spoilers on what happened next!

I love the show because it always gives me a burst of adrenaline and teases cliffhangers that always turn out exactly as their leader predicted. So the Professor has always been my favorite character because of his brilliant mind.

The gang has been shut in the Bank of Spain for over 100 hours. They have managed to rescue Lisbon, but their darkest moment is upon them after losing one of their own. The Professor has been captured by Sierra and, for the first time, doesn’t have an escape plan. Just when it seems like nothing else could go wrong, an enemy comes on the scene that is much more powerful than any they’ve faced: the army. The end of the greatest heist in history is approaching, and what began as a robbery will turn into a war.