Nine singers with extraordinary voices will battle it out to become the fourth grand champion of “Tawag ng Tanghalan” as they compete in the week-long grand finals on “It’s Showtime” from February 1 to 6. 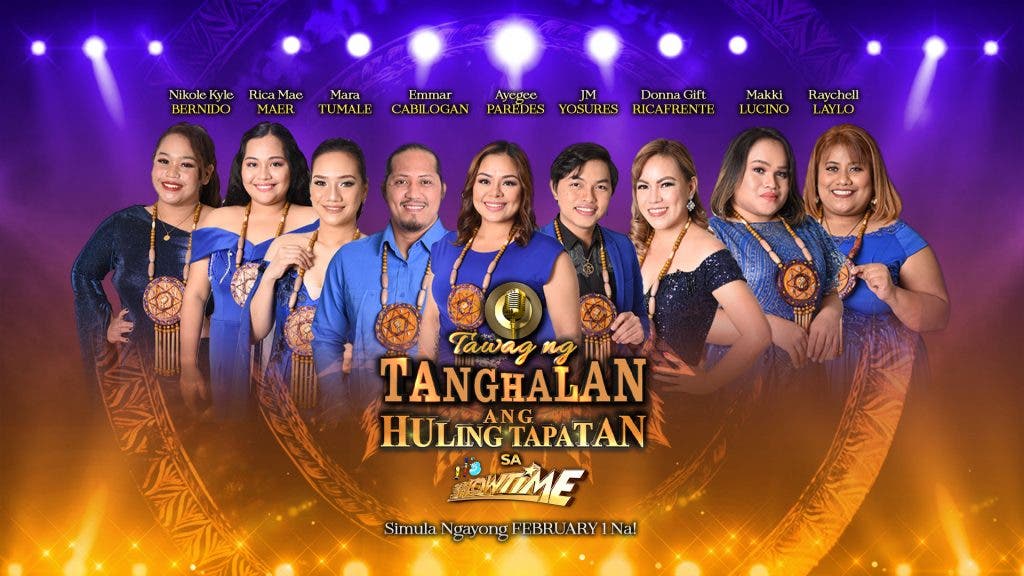 Like in the previous grand finals, the nine contenders will have to sing for the judges and the viewers because the score of each of their performance will come from the judges’ points (50%) and viewers’ text votes (50%).

The last slot in the “huling tapatan” was filled on Saturday (January 30) by Rachell Laylo of Lipa City, Batangas who secured her hold on the seat of power in the nerve-wracking “Resbakbakan.”

Come Monday, she will face off with fellow singing contest veterans, such as Rica Mae Maer of Villasis, Pangasinan, Emmar Cabilogan of Maasin, Leyte, and Nikole Kyle Bernido of Cagayan De Oro City.

On the first two days of the competition, the finalists will have to pull out all the stops in performing songs that depict their journeys. The one who will get the lowest combined score will be eliminated by the end of Tuesday’s episode.

The scores will be reset back to zero as the remaining finalists go all-out with their fight songs on Wednesday and Thursday, and “Now or never” songs on Friday. Again, one finalist per day will be eliminated on Thursday and Friday.

The fight reaches a critical stage on Saturday, as the remaining six grand finalists battle it out with their “Dream Songs” in order to escape elimination.

In the “huling tapatan,” the final three contenders will each perform a song medley by an artist in their bid to become the grand champion. In the end, the grand finalist who will record the highest combined score from the madlang people votes and judges’ scores will be named the grand champion.

Who among the nine grand finalists will become the fourth “Tawag ng Tanghalan” grand champion and follow in the footsteps of Noven Belleza, Janine Berdin, and Elaine Duran?

Don’t miss the “Tawag ng Tangahalan: Ang Huling Tapatan” on “It’s Showtime” from February 1 to 6 on A2Z channel on digital and analog broadcast. Digital TV box users can scan and look for A2Z channel in Metro Manila and in some parts of Cavite, Laguna, Quezon, Rizal, Bataan, Batangas, Bulacan, and Pampanga.

Viewers can also catch the show on Kapamilya Channel on cable and satellite TV (SKYchannel 8 on SD and channel 167 on HD, Cablelink channel 8, G Sat Direct TV channel 22, and most cable operator-members under Philippine Cable and Telecommunications Association), on Kapamilya Online Live daily on ABS-CBN Entertainment’s YouTube channel and Facebook page, and on the iWantTFC app (iOs and Android) and on iwanttfc.com. Viewers outside of the Philippines can also catch it on The Filipino Channel on cable and IPTV.