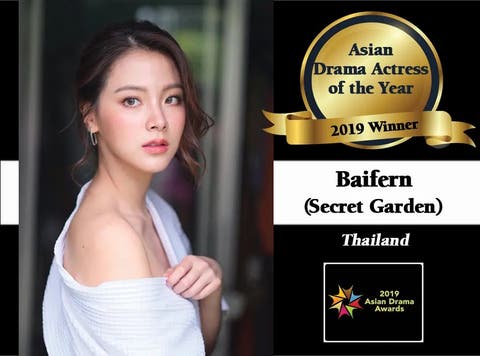 Baifern, also known as Pimchanok Luevisadpaibul, emerged as the winner of Asian Drama Actress of the Year for her role in the Thai adaptation of the hit Korean drama series “Secret Garden.” The Thai actress won by a landslide after the December 28 deadline of the online poll for the 2nd Asian Drama Awards, a whopping 161,738 votes or 61.67% beating 11 other finalists from South Korea, China, Taiwan, India, and the Philippines.

The 27-year-old actress/model rose to stardom after the sleeper hit “Crazy Little Thing Called Love” in 2010 with co-star Mario Maurer. She won two acting awards from the said TV series.

Here are the Top 10 countries that participated in this poll:

This year’s runner-up for Asian Drama Actress of the Year is Urassaya Sperbund, also from Thailand. The 26-year-old Thai actor was nominated for her performance in “The Scent of Memory.” She got a total of 31,557 votes or 12.03% overall.

Here are the complete results of our online poll for Asian Drama Actress for 2019: